I am Operations Manager for a pet rescue group called reTails.  We have a store in a local mall that we open on weekends to do pet adoptions.  Sometimes we hear things that really make us question our faith in people.

Last Sunday a young female cat was found in a bag in the donations at a Goodwill store on the west side.  One of their volunteers took the kitty to a local Petco, who referred her to our volunteer, Scott.  He is a cat rescuer deluxe, and has rescued hundreds of cats!  I want to be like him when I grow up.  Scott met the Goodwill person the next day, and she surrendered the kitty to us.  She kindly gave us a $50 donation to help the cat.

The sad part is, none of us were surprised about this, but, of course, we were very angry.  The rants flew into our email inboxes all evening.

Yesterday, Scott got a call from Goodwill saying that there was a flyer up in their store about a lost cat that looked very much like the found kitty.  Scott called the person who had posted the flyer and they met last night.  It was their kitty, who had crawled into the donations while no one was paying attention (naughty, curious kitty).  They did not discover she was missing until after the boxes and bags had been taken to Goodwill.  They went to Goodwill to ask if a cat had been found, but the volunteer in the store didn’t know anything about it, so they posted a flyer and left.

The flyer stated that there was a $100 reward for the finder of the cat.  The kitty’s owner insisted that reTails take the reward, which she gave Scott all in one dollar bills except for a single five dollar bill.  She told him “Now, I didn’t get this money dancing at a gentleman’s club”.   The kitty’s owner was at least 70 years old.  There was a lot of laughter and maybe one or two happy tears too.

So, reTails was able to return a beloved lost cat to her grateful owners and received donations totaling $150 to help other pets.  And our faith in humanity was somewhat restored!

I’m knitting a scarf now.  The pattern is Mae Geri and I’m using a cool yarn made from corn!  It’s Queensland Collection Haze. It’s 60% corn viscose, 40% cotton, which I think makes it very appropriate for a summer scarf.  I like this yarn, it’s easy to knit with, not splitty at all like some cotton yarns can be.

Here’s a picture of my progress. 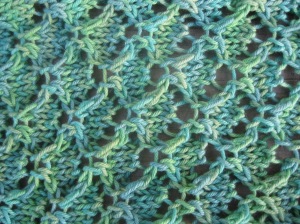 And here’s my helper, Rudy,  advising and inspecting my progress.

One thought on “Restoring My Faith in Humanity”

This site uses Akismet to reduce spam. Learn how your comment data is processed.

All The Way Back To The Beginning